SINGLE USE PLASTICS FROM ONE TO A TRILLION –

GET READY FOR SOME HUGE HUGE NUMBERS! 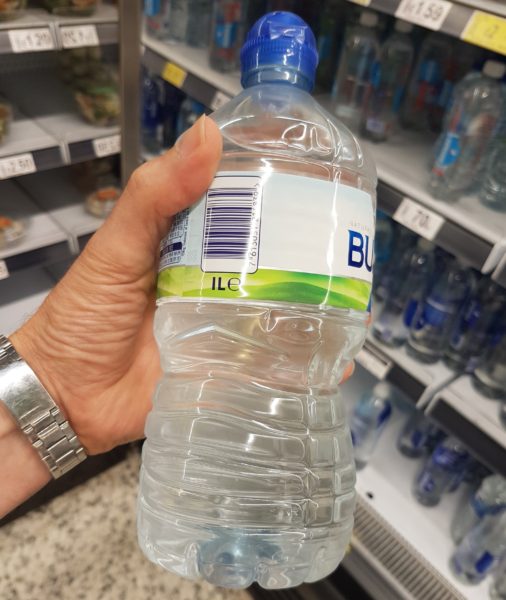 ONE:
This is a one litre bottle of water. The water inside weighs exactly one kilogram (a triumph of our metric system!). It costs about £1. Unfortunately, this water comes in a plastic bottle instead of out of the tap, so the bottle will probably be used just once and then thrown away.

It’s really strong: even in the ocean it will hang around for around 450 years before biodegrading (breaking down into smaller pieces). The really odd fact is: here in the UK you can get drinking water FOR FREE! out of the tap –it’s completely safe to drink (so is the expensive plastic-wrapped bottled water).  So why do some folk pay for drinking water in a bottle? It really is a mystery.

FIVE:
In 2015 the UK (United Kingdom) decided all large shops should charge 5p for a plastic bag instead of giving them away for free. Before then, most of us used to use plastic bags once and then just throw them away. Find out later how many plastic bags this simple step has stopped from ever being made.

ONE THOUSAND 1000 (one followed by three zeroes):
This is a really big number! Here is what 1000 of something looks like: 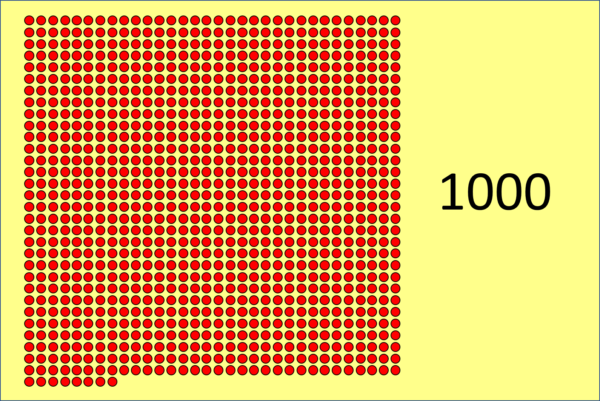 When talking about plastic waste, we’ll need even bigger numbers.

ONE MILLION 1000000 (one followed by six zeroes):
One million is so enormous that it’s very difficult to picture – but let’s try. Imagine if each of the red circles in the picture above were replaced with one thousand smaller circles, we would then have a million circles. A million is a thousand thousand!

1 million plastic bottles are bought around the world each MINUTE!! (1) . That’s a lot of plastic!! Where does it all go? Here in the UK, about 58% is recycled (2) but the rest is burned, buried or thrown away. A lot of plastic ends up in the ocean. Some scientists think that the ocean will soon contain more plastic than fish (1)

Tragically, 1 million sea birds are killed by marine plastic pollution annually (3). The birds are either entangled in the plastic or mistake it for food and try to eat it, but they can’t digest it so it becomes trapped in their stomachs.

ONE BILLION 1000000000 (one followed by nine zeroes):
It’s easy to get a million and a billion mixed up: they are both mind-bogglingly big numbers that are really hard to picture. But of course a billion is much much bigger: a billion is a thousand million!

GOOD NEWS ALERT! GOOD NEWS ALERT!
Remember the 5p plastic bag charge? Because of it, fifteen billion (15,000,000,000) plastic bags are estimated to have been saved. The charge is set to double to 10p in early 2020, which should save still more plastic from entering the oceans. Can you picture what all those plastic bags would have looked like? Fifteen BILLION??

ONE TRILLION 1000000000000 (one followed by 12 zeroes):
It’s very rarely in life that we meet numbers as big as one trillion – it is after all one thousand times bigger than the already vast, colossal, enormous  billion. The total amount of money spent by everyone in the whole of our UK in an entire year is between 2 and 3 trillion pounds. So a trillion of something is overwhelmingly huge!! So how is it possible that there are at least 15 trillion pieces of plastic in the world’s oceans (4), and how did they get there?

MICROPLASTICS are tiny pieces of plastic, less than 5mm long. Some of our clothes have plastic in them, and they release tiny microfibres into the water every time we wash them. And when larger pieces of plastic break down in the sea (this takes hundreds of years) they become many many microplastics. None of these trillions of tiny plastics come from nature: they’ve all been put there by humankind. Scientists aren’t sure how much damage these microfibres are doing to the oceans and their sea creatures.

EVEN LARGER NUMBERS??:
After million, billion, trillion the sequence goes quadrillion, quintillion, sextillion, … but you almost never see these numbers anywhere except for in maths. Here are some simple steps you can do to make sure we’ll never have to use these even bigger numbers when talking about plastic:

1) Always take a bag if you’re going near a shop.

2) If you’re going out, take a refillable bottle.

3) Drink tap water: it’s really good for you, and at least as safe as bottled water.

4) If you drink coffee on the go: keep a reusable coffee cup with you.

6) Tell shops if they are selling goods in pointless plastic.

7) Ditch the wet wipes: just use a washable cloth instead (or paper towel).

HOW MANY GIFTS IN TOTAL IN “THE TWELVE DAYS OF CHRISTMAS”?
DOGARITHMS
SUPERSTARS OF MATHS - LEONHARD EULER
43
SHARES
ShareTweet