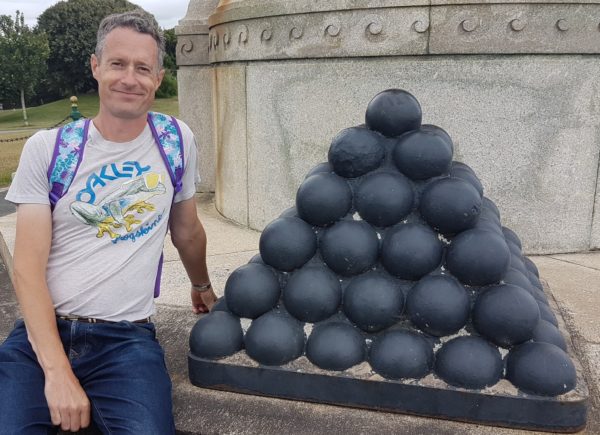 A reasonably curious mathematician might wonder how many cannonballs there are in the entire pyramid (including the “hidden” ones you can’t see on the inside of the pyramid).

To find the total we could just go from layer to layer, adding as we go:

Counting layer by layer works ok for small pyramids like our n=6, but suppose you had a 45 layer pyramid, starting with one at the apex and continuing for 44 more layers (with $45^2 = 2025$ cannonballs on just the base layer). That’s a lot of balls! – too many to count layer by layer. So now what?

The $\sum$ is apronounced sigma and means “add all the terms together”. The proof (by induction) of this formula is well-known to any student of A-level Further Maths.

ARE THERE OTHER TYPES OF PYRAMIDAL NUMBERS?

Yes! Other related sequences include the Tetrahedral numbers (given by the sum of the first n triangular numbers), and also the pentagonal, hexagonal or even higher order pyramidal numbers. Head over to the OEIS and if you can figure out the first few terms, the database will give you the next few, plus some interesting facts.

DOGARITHMS
WHAT'S SPECIAL ABOUT THE NUMBER ONE?
FACTORS AND MULTIPLES
90
SHARES
ShareTweet