To celebrate the traditional gym membership peak associated with the New Year, here are some muscles whose names have mathematical associations. As you read, see if you can match the muscle to the image in this picture: 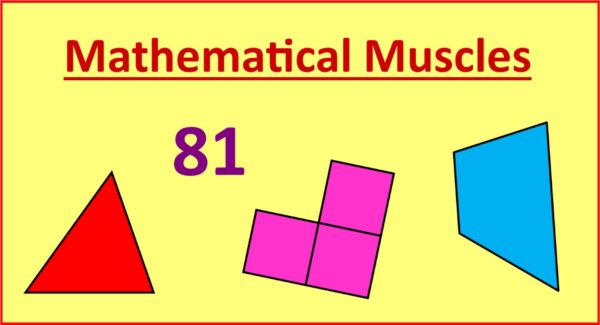 SCALENE: a set of three (or occasionally four) muscles in each side of the neck, so named as they are all of different lengths. Literal meaning “uneven” (from Greek σκαληνός). Similarly, a Scalene triangle has three sides of different lengths. My own scalene muscles get terrible trigger points from time to time, but fortunately they respond well to a good self-massage!

BICEPS (pl BICEPSES): a muscle of the upper arm, with two heads. The word “bicep” is a common error: biceps is the singular and bicepses is the plural. Literal meaning “2 heads”. Mathematical words using the bi- prefix (meaning 2) include Bisect (cut into two equal pieces), Biquadratic Expression (having only second and fourth powers of x) and Biquadratic Number (another word for a fourth power e.g. 3x3x3x3 = 81).

TRICEPS (pl TRICEPSES): a muscle of the upper arm with three heads (the long, lateral and medial). Literal meaning “3 heads”. They attach all to the ulna at the lower end, and to three different points on the scapula / humerus at the upper end. Mathematical words using the tri- prefix include Triangle, Triomino (a tile made of three joined squares) and Tridecagon (13 sided polygon). How many different Triominos are there? How many different Tetrominos (tiles made of 4 joined squares)?

TRAPEZIUS: a large flat muscle of the upper back. Literal meaning “table” (from Latin from Greek). The mathematical shape Trapezium has the same derivation.

WHAT IS THE POINT OF ALGEBRA?
TOP THINGS FOR MATHEMATICIANS TO DO IN WALES
SUPERSTARS OF MATHS - RENE DESCARTES
7
SHARES
ShareTweet